Apple cider vinegar health benefits have gotten quite the reputation as a wonder cure of sorts. Health, weight loss, fat burning, beauty, and restoration are just some of the qualities contained in apple cider vinegar’s impressive and ever-expanding résumé. It has long been used as a home remedy, but in recent years ACV has gained traction for its ability to support weight loss, reduce cholesterol, lower blood sugar levels, and improve symptoms of diabetes.

The History of Apple Cider Vinegar 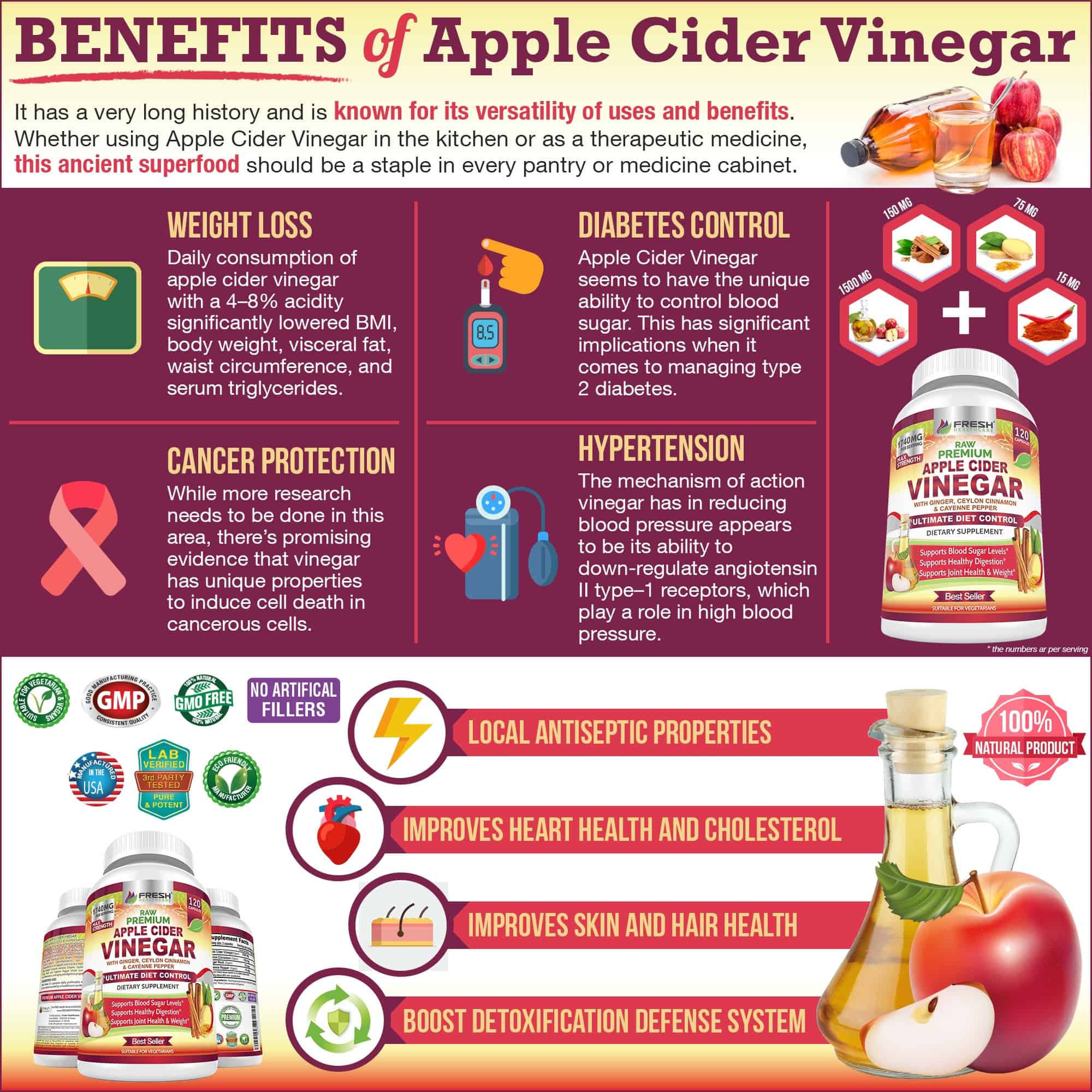 Apples are a veritable goldmine of vitamins, minerals, and nutrients. They pack a powerful nutritional punch and are truly deserving of the age-old adage, “An apple a day keeps the doctor away.” These powerhouses contain beta carotene (an antioxidant), pectin (a soluble fiber), as well as a host of minerals, the most notable being potassium.

Along with yogurt, cheese, beer, and wine, vinegar is one of the most popular foods created from yeasts and bacteria. The yeast ferments the sugars, causing a chemical reaction that changes it to alcohol, then the alcohol is further broken down into acetic acid by specific bacteria. The family of bacteria that are responsible for converting alcohol into vinegar are called acetobacters.

This thick filmy substance floats in the vinegar, often near the top, and is called the “mother of vinegar.” The mother is often erroneously believed to be responsible for creating vinegar, but it is actually the end result of the whole process rather than the initiator, however, as the “mother of vinegar” is likely to have a large concentration of acetobacters clinging to it.

The mother consists of dozens of strains of good bacteria. It also contains enzymes, which are essential for breaking down foods so that your body can use their nutrients. The concentrated bacteria and enzymes from the mother give ACV its antifungal, antiviral, and antibacterial properties, which help in healing the body. Apple cider vinegar also contains trace amounts of other acids, fiber, vitamins, and minerals.

Apple cider vinegar has been used for thousands of years for everything from soothing a sore throat to burning fat and improving blood sugar levels. Supported by scientific research, modern studies show that there are, indeed, numerous health benefits of apple cider vinegar.

Studies have found that vinegar may help to lower glucose levels, making it a beneficial treatment for people with hypoglycemia, insulin resistance, and type 2 diabetes.

Apple cider vinegar has become a staple of natural skincare. With purported benefits like clearing acne, reducing stretch marks, brightening skin, toning skin, and more can you really blame anyone for risking smelling like a salad dressing if it means better skin? See our guides using apple cider vinegar to reduce stretch marks, tone skin, and improve the appearance of keloids.

Hair that looks dull, brittle, or frizzy tends to be more alkaline or higher on the pH scale. The idea is that an acid substance, like ACV, helps lower pH and brings hair health back into balance. ACV is also a popular home disinfectant. It may help control the bacteria or fungi that can lead to scalp and hair problems, such as minor infections or itchiness.

Given that vinegar lowers blood sugar and insulin levels, it makes sense that it could also help you lose weight. Several studies suggest that vinegar can increase satiety, slow down the digestion of the sugars, and may prevent the build-up of body fat. Read more on Apple Cider Vinegar for weight loss here.

When blood pressure stays elevated for long periods of time, it can increase the risk of heart disease and stroke. According to a study in Bioscience, Biotechnology, and Biochemistry, when rats consumed apple cider vinegar, they had reductions in blood pressure levels

Arthritis is a very common disability. Arthritis includes inflammation of the joints and surrounding tissues; certain types of arthritis may also involve the immune system. Supporters of apple cider vinegar believe that it contains anti-inflammatory properties that can help with arthritis symptoms. Check out how to use apple cider vinegar for arthritis.

The naturally occurring phenolic compounds have a supportive role in reducing oxidative stress and inflammation along with stimulating efficient bile production, which is how the body supports the removal of waste and unhealthy fats. Check out how to detox with an apple cider vinegar enema.

Because acetic acid kills unwanted bacteria when it comes into contact with it, it essentially acts as a natural antibiotic and antiseptic. ACV has traditionally been used for warts, nail fungal infections, ear infections, gut infections, throat infections, skin infections, and more.

ACV has been shown to kill unhealthy bacteria and other microbes in the digestive tract, such as Candida. It is also known to promote the production of healthy bacteria. Due to the pectin content, it can help soothe and support an upset stomach and provide compounds that support and feed healthy gut flora. Read more about improving digestion with apple cider vinegar.

Apple cider vinegar is without a doubt one of the healthiest things you can take for maintaining good health. It can be incorporated into almost any aspect of your daily routine, from your meals, to smoothies, to simply taking a spoonful or two every morning. It doesn’t matter what your preferred method of consumption is, just so long as you take it.

There is a general consensus in the effectiveness of this simple tonic recipe made with apple cider vinegar. It is recommended to drink this tonic three times a day, preferably before or during meals.

Instructions: Mix the ingredients together in a large glass.

Try this all-purpose recipe to start experiencing the benefits of apple cider vinegar. Experiment with the amount of vinegar you add, starting with the least and building up your tolerance over time until you find a level that works for you.

Since it can be quite a tart taste, you can add a little raw honey to the mixture. We are sure you have all heard about the wonders of raw honey, so this gives your body a double whammy in health-giving properties.

The taste of apple cider vinegar even diluted can often be too tart for some.

There are also apple cider vinegar teas that can be used to supplement a weight loss program.

Taking more than this isn’t recommended because of potentially harmful effects at higher dosages, such as drug interactions or the erosion of tooth enamel. It’s also best to start off with 1 teaspoon (5 ml) to see how you tolerate it. Do not take more than 1 tablespoon (15 ml) at a time, because taking too much at one sitting may cause nausea.

Apple cider vinegar is a powerful substance, which is precisely why it is such an effective remedy for so many ailments. However, with power comes responsibility. Even when used correctly as prescribed, there can be side effects from the reactions that apple cider vinegar precipitates in your body.