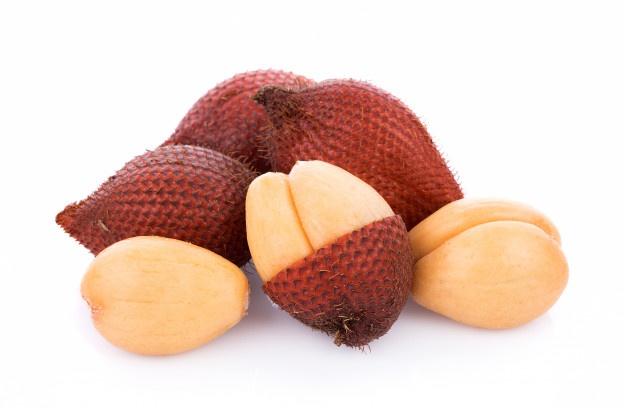 Health fads come and go but what remains fundamental is the importance of fresh fruit to our health, it is a vital part of a balanced diet. Salacca fruit benefits is at the heart of helping us fight off diseases such as cancer. Fruits are full of vitamins, minerals and antioxidants. Unless you are allergic or have a health condition, which doesn’t allow fruit consumption, then a variety of fruits must be consumed every day.

When it comes to fruit, there are plenty of choices, from  the common such as bananas to the more exotic such as prickly pears. We know much about the everyday fruits but not so much about those rarities. Salacca fruit benefits come from a more exotic species and are little gems and their health-promoting qualities are slowly being revealed.

The Salacca fruit, also known as Salac or Snake Fruit, due to its reddish-brown scaly skin. This is one such fruit that many may not be familiar with is thought to be native to South Sumatra and southwest Java. However, its popularity has led to it being cultivated in other parts of the world such as Thailand and Indonesia.

The fruit itself looks weird, almost alien in appearance. It grows on palms in clusters and the tree is evergreen. The Salacca grows in humid, tropical conditions and thrives when hidden from direct sunlight.

Apart from its reddish-brown scaly skin, internally, Salacca consists of three white lobes, which contain inedible seeds. The taste of the flesh is sweet with an acidic kick and the texture is similar to that of an apple but slightly drier.

Apart from tasting sweeter than honey, it also contains an array of vitamins and minerals such as iron, calcium, vitamin C and Vitamin B2. It is also packed full of other health-promoting substances such as Beta-Carotene, which is a powerful antioxidant. Therefore this fruit can help in the fight to prevent disease and aids overall health.

Beta-Carotene is a red/orange pigment found in vegetables and fruits, it is a powerful antioxidant. We convert Beta-Carotene into Vitamin A, which is an essential Vitamin. This antioxidant protects the body from free radicals and can lower the risk of developing eye problems like macular degeneration and cataracts thanks to its protective qualities and vitamin A conversion.

Anaemia can strike anybody at any time and its causes are many. However, a lack of iron in the diet is one of the main reasons people become anaemic. This can lead to symptoms of tiredness and fatigue. Salacca fruit contains generous amounts of iron, which can be easily absorbed by the body to help prevent simple iron deficiency anaemia. This fruit helps boost energy levels too and prevents fatigue.

We all suffer from digestive problems from time to time. Minor digestive upsets can be treated without medication by using herbs or even food substances. The Salacca fruit is rich in fiber and if included in your diet can help prevent constipation, cramps and flatulence. It has also been used as a remedy for indigestion in Asia for many years. However, it should be avoided if you suffer from ulcers.

Snake fruit as already mentioned, is dense in nutrients such as vitamins, minerals and antioxidants. These are utilized by the immune system helping enhance immune cells. These cells can be seen as an army of soldiers protecting the body from invaders and all armies need ammunition to fight. Including Salacca fruit in your diet daily can keep your defenses in tip-top condition thanks to its vitamin C content, which is higher than most fruits.

Diabetes hits the headlines regularly, particularly because of the sheer numbers of people being diagnosed every year. Poor diet, lack of exercise, obesity and genetic susceptibility all play a part in this modern-day epidemic.

Lifestyle changes, including more exercise and weight loss, can help control this disease and some low-calorie diets have even been shown to reverse it. Type 2 diabetes occurs when the pancreas no longer produces enough insulin, or the body cannot utilize the insulin present. This circulates the body to control blood sugar levels. Inadequate levels of insulin can cause spikes in blood glucose levels and over time consistently high blood sugar levels can damage the kidneys eyes and other organs. This condition also increases the chances of regular infections, which can become life-threatening.

How can Salacca fruit help? Pterostilbene is an antioxidant  linked to lowering cholesterol and glucose levels. It also increases insulin sensitivity and is found in this fruit. Therefore regular consumption can help lower and control blood glucose levels in diabetics and healthy individuals.

RAISE A GLASS TO SALACCA

Salacca fruit can be eaten on its own, this is the simplest way of consuming this fruit and obtaining all the health benefits it has to offer. However, there are other ways of using it too.

How about some Snake fruit wine? The mature Salacca is chopped and packed into containers and brewed with sugar and yeast for two weeks. Then the wine is pressed to remove sediments, leaving behind a sweet, golden, honey-colored liquid, which contains 13.5 percent alcohol. This can replace the usual red or white wine many have with their daily meals, whilst still giving the health benefits of this fruit, which humbles the common grape.

Salacca proves that there is a whole new world out there of fruits that are yet to be discovered by many. Availability is, of course, a problem with the more exotic things in life. But as these products become more common, then they are well worth trying, not just because they are new, but because they are bursting with health-promoting properties too. Some even out do the fruits we have learned to love and eat everyday.

If you want lower cholesterol, better blood sugar balance, healthier eyes, better digestion and an immune system boost, then salacca fruit is well worth having.